This World Leaders Forum program features a moderated panel discussion in partnership with the Student Affairs Caucus of the Columbia University Senate. The panel will comprise a diverse group of the University’s undergraduate and graduate students who have unique leadership perspectives and are dedicated to a wide range of global issues. The panel discussion will be followed by a moderated question and answer session with the audience.

Introduction and Moderated by:
Lee C. Bollinger, President of Columbia University in the City of New York 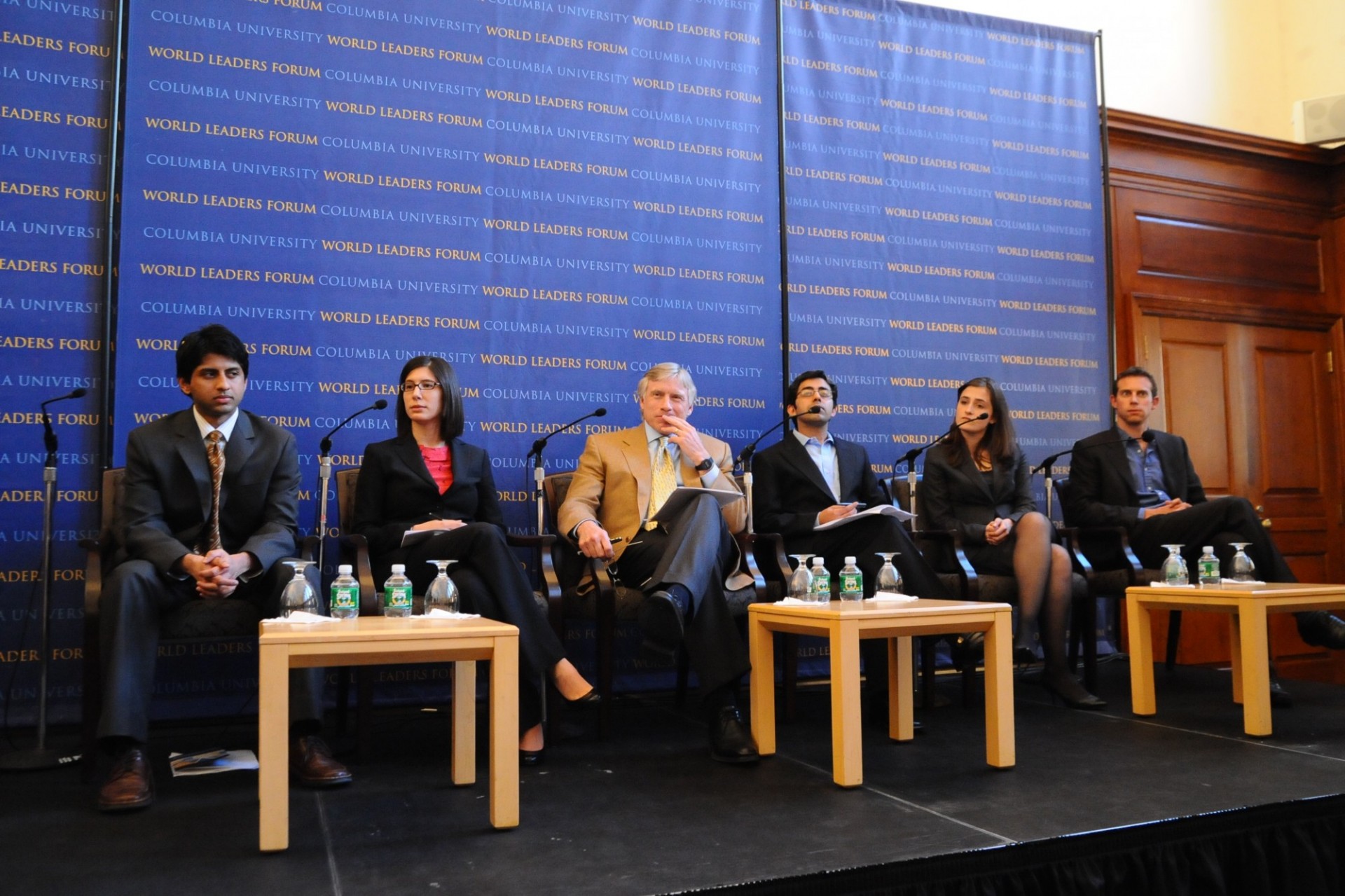 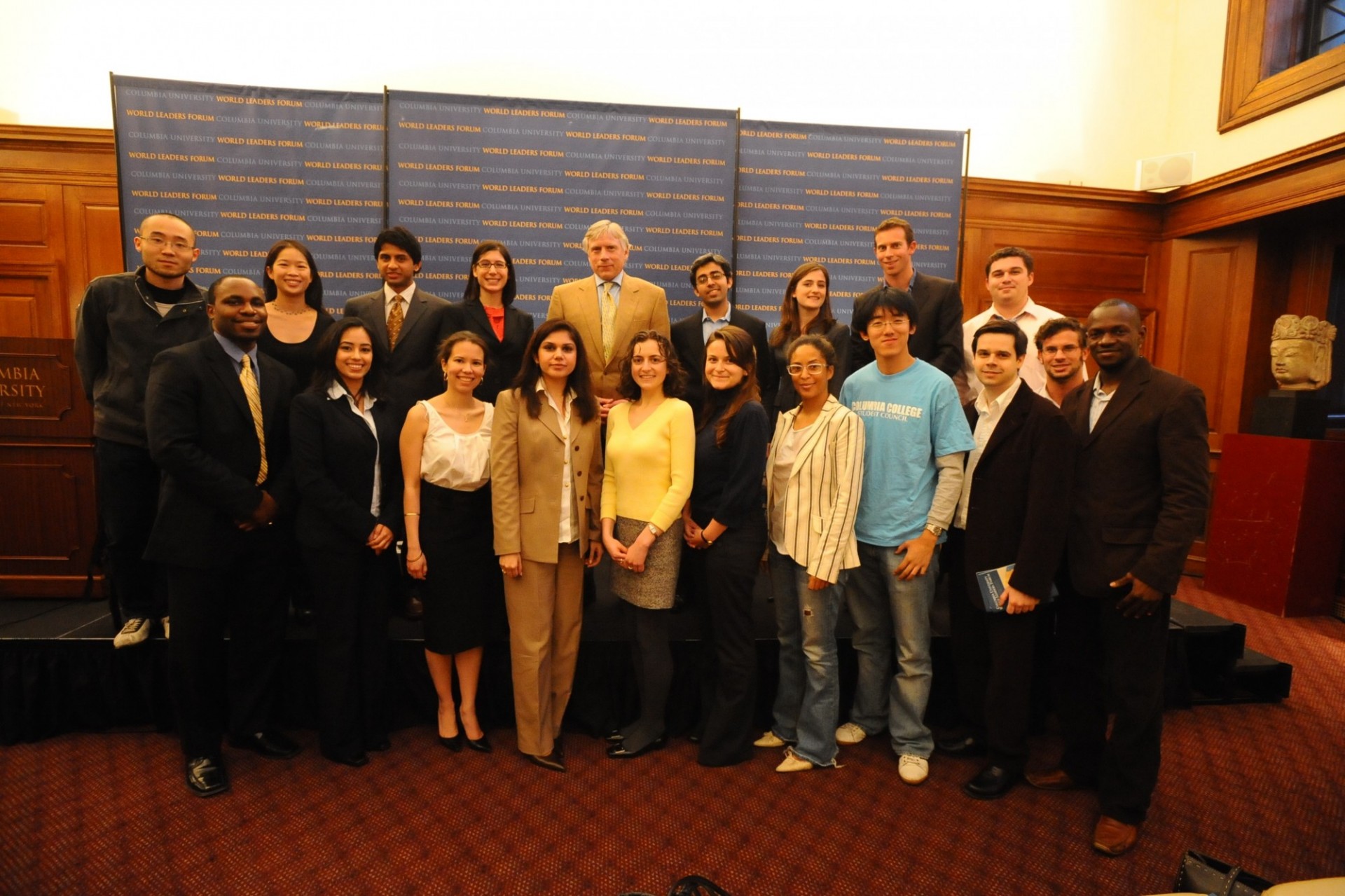 Andrea Hauge is currently a student at Columbia Business School and co-chair of the Student Affairs Caucus.  She serves on the University Senate’s Executive Committee and the Task Force for Campus Planning.  She also serves as a student senator representative to the Columbia Alumni Association.  Andrea is a graduate of Columbia College, where she majored in sociology.  She also holds an MSc in Development Management from the London School of Economics.  Upon graduating in May, Andrea will join Credit Suisse’s Investment Banking Division.

John K. Johnson is a third-year student at Columbia Law School and co-chair of the Student Affairs Caucus. John serves on the University Senate's Executive Committee, and on the Senate's standing committees on External Relations and Research Policy, and Rules of University Conduct. He has also served as an elected representative to the Law School Senate for the last three years. John is a graduate of Yale College, where he received a B.A. in Political Science. Following his graduation this May, John will join international law firm Dewey & LeBoeuf LLP.

Sashti Balasundaram hopes to graduate with a Masters in Public Health: Environmental Health Sciences this May 2008.  He is a current intern for the Earth Institute at The Center for International Earth Science Information Network (CIESIN).  He helped form the organization - Students for Environmental Action (SEA) - which is a partnership of students from across the varying medical campus schools including Public Health, Medical, Dental, Nursing, and the Graduate School.  This organization works on issues promoting environmental sustainability across the Columbia Medical Campus and works alongside community organizations enabling interactions and improvements with our fellow neighbors.

Sashti is interested in pursuing a career within the water sector especially in the field of water-sanitation and hopes to improve the situation at the global health level.  After graduation he will take some time off to figure out the best direction to pursue these issues. He has thoroughly enjoyed his brief stint here at Columbia University and feels overwhelmed by the recognition this has garnered through his minute activities.

Melissa D'Agostino began her career as an associate in the risk management group at PricewaterhouseCoopers, LLP (PwC).  In this capacity, Melissa performed a wide array of services for telecommunications companies such as attestation support, litigation support, and revenue recapture services.  During her time at PwC, Melissa mentored high school students through Minds Matter, a volunteer organization that provides college prep guidance to public high school students.  Melissa made a career switch in 2003 and entered education through the NYC Teaching Fellows program.  She taught math in a public middle school in the Washington Heights section of Manhattan for three years.  Through this experience, Melissa gained an interest in the management of schools and school systems, and decided to pursue her MBA with the intent of applying management tools to the public education sector upon graduation.  Last summer, Melissa was an Education Pioneers Fellow and interned for Teach For America under the VP of Strategy for the Teacher Support and Development group.  Currently, Melissa serves as Vice President of Community for the Columbia Business School student government and the chairperson of Community Action Rewards Everyone (CARE).  Upon graduation, Melissa will work for Uncommon Schools, Inc., which is a Charter Management Organization in New York City.  Melissa is a founding leader of the newest school in the Uncommon Schools network, Bedford Stuyvesant Collegiate Charter School (BSC).  Melissa will serve as the Director of Operations for BSC, which will open its doors to students in August 2008.

Melissa graduated from Wesleyan University with a B.A. in Economics.  She also earned her MSE in 2006 from City College of NY.  Currently, Melissa is an MBA candidate at Columbia Business School, pursuing a concentration in social enterprise.

Emma Kaufman, raised in Carlisle, PA, Emma Kaufman will graduate with a double major in Philosophy and Gender Studies. Emma serves as Editor-in-Chief of the Columbia Journal of Literary Criticism, founded a volunteer program in Harlem, and competed on Columbia's nationally-ranked mock trial team. Committed to exploring the relationship between gender and justice, she has worked at the Legal Aid Society, the Brooklyn District Attorney's Office, the Sexuality Information and Education Council of the United States, and Planned Parenthood. A 2007 Guggenheim Fellow, Emma interviews inmates and advocates for prison reform with the Correctional Association of New York. In November, Emma was awarded a Marshall Scholarship for two years of study in the United Kingdom. She will read for an M.Phil in Criminology at the University of Oxford.

Will Straw is a US-UK Fulbright Scholar completing the Program in Economic Policy Management (MPA '08) at the School of International and Public Affairs at Columbia University.

Prior to arriving in the United States last June, Will worked for Her Majesty's Treasury in London. Over four years, Will worked primarily on enterprise and growth issues including regulatory reform, employment law, climate change, and reforms to the UK pensions system. In 2005, Will was the Treasury's press office on financial services and international issues during the UK's Presidencies of both the G-7 and European Union. He also wrote articles for Gordon Brown and other ministers that were published in the Financial Times among other newspapers.

Will's undergraduate degree was at New College, Oxford in Philosophy, Politics, and Economics. Upon completing his degree in 2002, he was elected president of the Oxford University Student Union. In this position, he campaigned successfully for the return of the maintenance grant for poorer students, unsuccessfully against the government's proposed increases in tuition fees, and partially successfully against large rent price hikes at Oxford.

In his spare time, Will is campaigning to establish the “Individual Responsibility to Protect” (R2P) concept. This is a grassroots, bottom-up principle to support the top-down R2P concept adopted at the 2005 UN General Assembly. He is also vice-chair of governors at an elementary school in South London, where he grew up.

Bilal Tanweer is a writer, teacher and an activist. Aside from working as a journalist and a teacher, he has been involved in activism with grass-roots left-wing organizations in Pakistan. Since the imposition of martial law in Pakistan on November 3, 2007, he has been involved in organizing protests and other awareness raising activities in New York with a number of other individuals. The group he is working with right now is the US-affiliate of Students Action Committee (SAC) Pakistan. SAC in Pakistan has been instrumental in raising awareness and mobilizing people for the cause of democracy and independent judiciary. In the US, SAC has organized protests, talks and other events to shape media opinion and garner support for the deposed judiciary in the country.

Bilal Tanweer’s poetry and fiction have appeared in various Pakistani literary journals. His writings on literature and politics are regularly featured in Pakistani newspapers. At present he is on a Fulbright Scholarship pursuing an MFA degree in fiction writing at Columbia University, New York.